I need to jot down my thoughts about the week I had…AMAZING!

On Wednesday, I met up with my long time friend that I have not seen in a long time. She was in my area for the week so we met up and had supper where we chatted for hours. Isn’t it something when you haven’t seen someone for a very long time and then you met up and you pick up the conversation like it was just yesterday.  She is an amazing person who has been someone I could be myself, tease, laugh and cry with. She is my dear friend and I was so happy to meet up with her this week.

The following day, I drove into town to pick up dinner for Doreen and I and when I arrived at Blue Quills, I texted her to say that I was outside.  She texted back saying that they were taking a tour of the building and she invited me to join her group. UnBQ was a Residential School back in the day. During the 1970s, my mom worked in the kitchen as a cook and I remember going to work with her once in a while and remembered the kitchen being so much bigger.  I was always amazed at all the work she and the other did to feed the hundreds of students who resided at this school. Today, UnBQ is a place of post secondary and graduate studies where students can obtain a Degree, Masters or Doctorate degree.

As we strolled along side the others in the tour, my thoughts were racing and so were my emotions. We viewed the different rooms and areas, that in the past, were places that were feared by the students. Then all of a sudden my friend says to me ” do you know Cindy Paul? and I said back to her, I don’t think so, why? She said that Cindy is a song writer and wrote the song “He Can Fancy Dance” and will be singing this song at the upcoming Gathering of Nations in Albuquerque New Mexico. Automatically, I went to YouTube to listen to her song and OMG, the feelings this song brings.https://youtu.be/hi_8MB1Gn5c

Cindy Paul was in our tour and I couldn’t pass up the opportunity to introduce myself and take a photo with her. What an inspiration she is, I only spoke to her briefly and I felt that she has a very kind and gentle soul. Since we were on a tour, I had to be respectful, so I moved back beside my friend and we continued our tour. I whispered to her, “OMG HOW AWESOME WAS THAT!.. and she’s looks back at me and says “RIGHT!”. 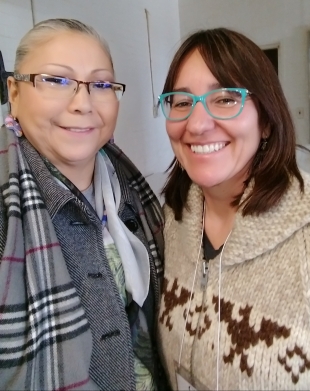 Cindy Paul and I

I took 6 enthusiastic Grade 12 students to the UofA for their annual Aboriginal Student Discovery Day.  For the opening address, they had Dr. Sean Lessard, who is an Associate Professor at the UofA.  He gave the students a very inspiring message through story and I feel that it brought the meaning closer to the students.  As Native People, we have a knack for telling stories and Dr. Lessard spoke of a boy he was asked to mentor and watch over as he journeyed through his time at the UofA.  He spoke of this boys challenges and achievements and how he worked through them to finally graduate with his degree.  His words were very appropriate for the his audience.  After his presentation, I went over to meet him and spoke with him very briefly and I thanked him for his words of encouragement and said he said that he enjoys speaking to the youth.  I wanted to take a photo with him, but for some reason I didn’t ask, dang.  After the event, we headed home and I turned to the students and asked, “how was the day” and they all said in unison “IT WAS AWESOME AND LETS DO THIS AGAIN!”.  Awwww success…:)

My week just kept getting better and better and today, I attended the Grand Opening of the Professional Native Indian Artistic Inc. Permanent Exhibit that Portage College was hosting. WOW, what a great event, I was so thankful that I took the 1 hour drive to Lac La Biche, even though the weather was kinda iffy, i still went.  The Professional Native Indian Artists, Inc. Exhibit was fabulously organized and presented by the staff of Portage College.  It was meant to showcase and honor the 7 talented Native artists who were known as the Group of Seven.  Officially known as the Professional Native Indian Artists Inc., the group consisted of ground-breaking Indigenous artists Jackson Beardy (1944–1984), Eddy Cobiness (1933–1996), Alex Janvier (b. 1935), Norval Morrisseau (1932–2007), Daphne Odjig (1919–2016), Carl Ray (1942–1978), and Joseph Sanchez (b. 1948). 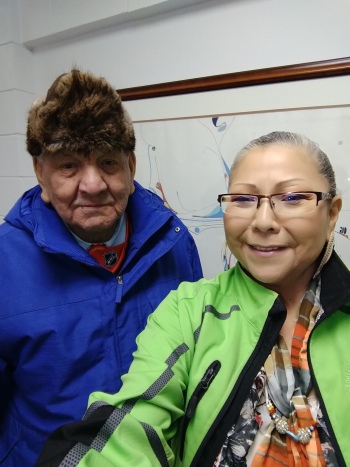 Alex Janvier in front of one of his paintings

I had the honor of speaking with both Alex Janvier and Joseph Sanchez who are the two surviving members of this group.  Both had good stories of their journey and of their thoughts of the day.  Both are humble and have great personalities that everyone witnessed as they spoke to people individually and on stage.  I had the privilege of speaking to Alex Janvier and one of the first questions he asks me is “where are you from?” and “who are your parents”?  This is normal, as Native People this is how we introduce ourselves to people of other nations so that we can make that connection.  I told him who my parents were, and he thought for a bit and said, I think I know him, meaning my dad and just like that a connection was made.  Even though I only spoke to him for about 10 minutes, it was very special and I will never forget.

Joseph Sanchez in front of one of his paintings

I also spoke to Joseph Sanchez very briefly and he to is very humble and a great communicator.  He was in high demand by everyone around so I didn’t get to speak with him very long but I did get an opportunity to take a photo with him and with Alex together.  AWESOME!

Alex Janvier, Joseph Sanchez and myself. What an honor it was to meet these two artists

After the presentations and tours, we were treated to a taste tester style dinner that was prepared by the students of the Culinary Arts program.  This is where our students from Saddle Lake shone.  We sponsor students for this program and was delighted to see many of them dressed in their finest culinary art attire preparing the tasty food.  This event was well attended by the Portage College staff, dignitaries and visitors.  I took this opportunity to rub elbows with many of the people there and tasted every bit of food that was presented.  Simply delicious.  Wow what a week.  I haven’t had a week like that in a very long time and I really enjoyed myself.  Thanks for taking the time to read my blog post.  I’ve had to rewrite it several times, which was somewhat annoying, but there you have it.  Bye for now 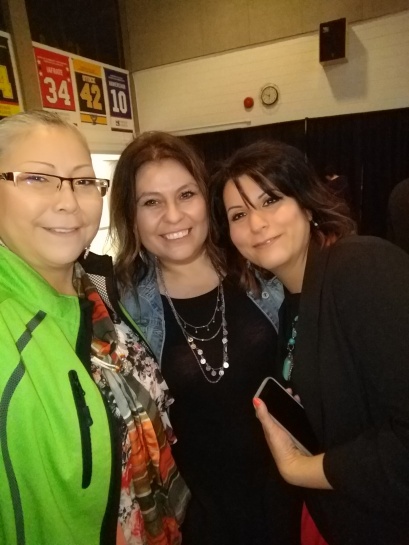 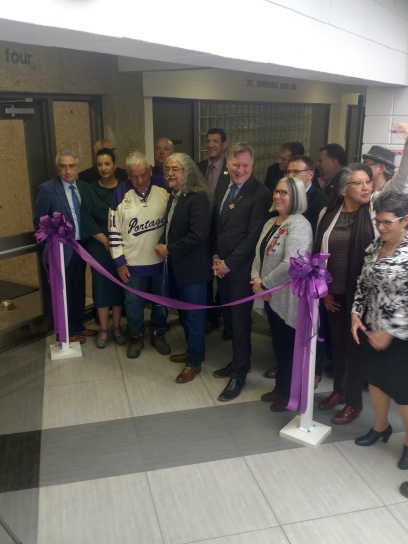 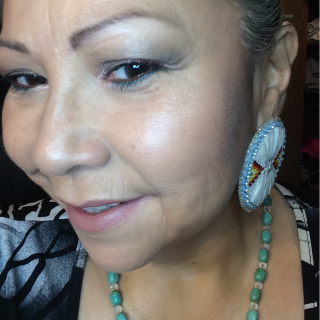